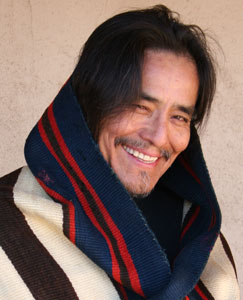 Shonto was born February 7th in 1954 in Arizona on a Navajo Indian Reservation. There was no interaction with any type of electronics which helped him discover about his culture and traditions more naturally and spiritually. His mother was a traditional rug weaver and his father a well respected medicine man.

Shonto began drawing on the dirt, his very first canvas where he would draw with his brothers using sticks. He felt privilaged to be able to grow up herding sheep where he could dream of a future and things bigger than what he has seen.

Begay told School Art that he would like to encourage young artists, " I challenge them to find their own story rock, their own sacred space where they can dream, dream, and draw and where they can be creative."

Growing up Shonto attended a Bureau of Indian Affiars Boarding School on the Navajo Reservation and attended college where he received a bachelors degree of fine arts. He then worked as a national park service ranger for 10 years and spoke to audiences of many ages about art and his culture.

Other than illustrating, Shonto also writes a few books of his own. Since 1983 he has be a professional artist that shows the realistic view of reserveration life to the beauty among people in the mesa themselves. His paintings have a very impressionistic  feel to them that "capture the moment in time".
Shonto, his wife Cruz, and their 3 daughters and one son, reside in Shonto, Arizona. Up until September 22, Shonto's work could be found  Santa Fe, New Mexico in the Mark Sublette Medicine Man Gallery.